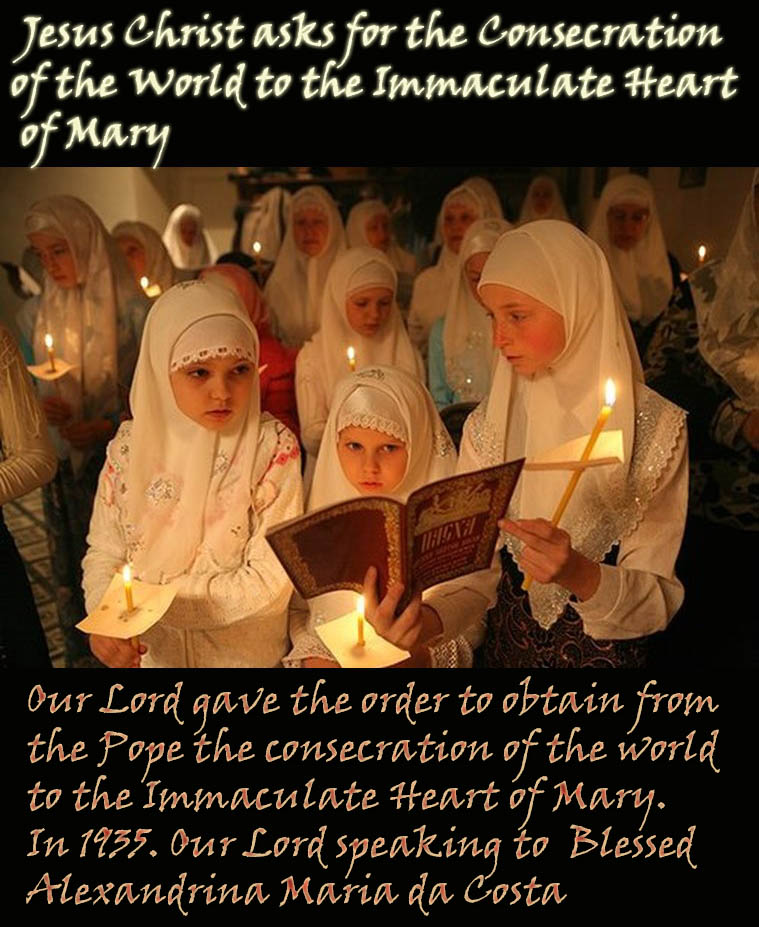 Consecration of the World to the Immaculate Heart of Mary

A tribute to Blessed Alexandrina - a living miracle of the Eucharist.

“ I desire that, after your death, your life may be known, and that will happen; I shall see to it.  It will reach the ends of the earth .”

The desire of Jesus to see a widespread knowledge of the life of Blessed Alexandrina Maria da Costa of Portugal is starting to be fulfilled, as devotion to her grows steadily throughout the world.  One of the great mystics of modern times, a ‘victim soul' chosen by Christ to suffer in atonement for the sins of humanity, she appears set to become an important and well-loved saint in the Universal Church. 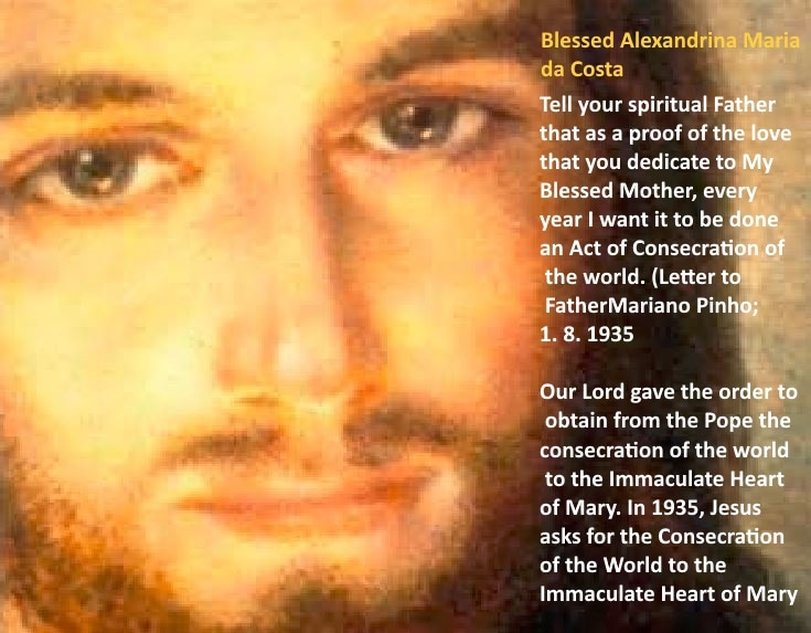 The first request dates from July 31, 1935, and Alexandrina, who was already a voluntary victim of the Eucharist, offered herself as well as "victim for the consecration of the world to our little Mother in Heaven." Our Lord having urged her to obtain this consecration for more than a year, finally her spiritual director, Fr. Mariano Pinho, S.J., transmitted this request for the consecration of the world on September 11, 1936, to His Holiness Pope Pius XI by the intermediary of his Secretary of State, Cardinal Pacelli. The Holy See then ordered the Apostolic Nunciature of Lisbon to initiate an inquiry into the matter. On July 11, 1937, the Provincial of the Jesuits wrote to the Nuncio, relating to him the conclusion of the investigation:

-
Bedridden for life from the age of twenty, after sustaining a serious injury some years earlier while trying to escape from an attack on her virtue, she suffered unspeakable pain throughout her life and mystically underwent the Passion of Christ on Fridays to atone for the sins of humanity.  She also had frequent ecstasies during which she saw and spoke with Our Lord and Our Lady, and offered her sufferings to bring about the consecration of the world by Pope Pius XII to the Immaculate Heart of Mary, an act which in turn shortened the duration of World War II.

She was unable to go to Fatima, but the Virgin Mary granted her the grace to understand and live the messages in the most perfect way, intimately uniting herself to the desire of the Blessed Virgin. By offering her passion in this way, Alejandrina became a victim soul for love of the Eucharist and the consecration to the Immaculate Heart, which are fundamental messages of Fatima.
During this period, she was entrusted by Our Lord with the propagation of the message of Our Lady of Fatima. After she had received Communion one morning Jesus reportedly told her, "Through the love which you have for my blessed Mother, tell your spiritual director that as I asked Margaret Mary [St Margaret Mary Alacoque] for devotion to my divine Heart, so I ask you to urge the consecration of the world to the Immaculate Heart of my Mother." From that day, Alexandrina offered herself as a victim to achieve this expressed wish of Our Lord.

Alexandrina prayed and offered many sufferings that the bishops would ask the Holy Father for the consecration of the world to the Immaculate Heart of Mary.
In 1938 Jesus said to her:
"As a sign that it is My Will that the world be consecrated to the Immaculate Heart of My Mother, I will make you suffer My Passion until the holy Father has decided to implement this consecration."

History of the Consecration and Related Events
July 13, 1917Our Lady promises  to "come and ask the consecration of Russia to Her Immaculate Heart"1
June 13, 1929Our Lady fulfills her promise, asking "for the consecration of Russia to Her Immaculate Heart, promising its conversion through this means and the hindering of the propagation of its errors."2
date unknownPius XI (1922-1939) informed of this request3
1938Portuguese Bishops ask Pius XI for the Consecration of the World to the Immaculate Heart. It is said they were influenced to do this by the spiritual director of Bl. Alexandrina da Costa (1904-1955).
June 1940Request made to Pius XII through the Bishop of Macau, and a little later through Father Gonzaga de Fonseca. Mention is made of Our Lady asking the Consecrating of  Russia to the Immaculate Heart.
December  1940Sr. Lucia writes letter to Pius XII, saying that Our Lord Himself requests the Pope to "consecrate the world to the Immaculate Heart of Mary, with a special mention for Russia, and order that all the Bishops of the world do the same in union with Your Holiness."4
October 31, 1942Pope Pius XII consecrates the world to the Immaculate Heart.
July 7, 1952Pope Pius XII consecrates the Russian people to the Immaculate Heart
November 21, 1964Pope Paul VI renews, in the presence of the Fathers of the Vatican Council but without their participation, the consecration of  Russia to the Immaculate Heart.
May 13, 1982Pope John Paul II invites the bishops of the world to join him in consecrating the world and with it Russia to the Immaculate Heart. Many do not receive the invitation in time for the Pope's trip to Fatima, where he accomplishes the consecration. Sr. Lucia later says it did not fulfill the conditions.
October 1983Pope John Paul II, at the Synod of Bishops, renews the 1982 Consecration
March 25, 1984Pope John Paul II, "united with all the pastors of the Church in a particular bond whereby we constitute a body and a college," consecrates "the whole world, especially the peoples for which by reason of their situation you have particular love and solicitude." Both the Pope and Sr. Lucia initially seemed uncertain that the consecration has been fulfilled, but shortly thereafter Sr. Lucia tells the papal nuncio to Portugal that the Consecration is fulfilled.
May 13, 1984One of the largest crowds in Fatima history gathers at the shrine to pray the Rosary for peace.
May 13, 1984An explosion at the Soviets’ Severomorsk Naval Base destroys two-thirds of all the missiles stockpiled for the Soviets’ Northern Fleet. The blast also destroys workshops needed to maintain the missiles as well as hundreds of scientists and technicians. Western military experts called it the worst naval disaster the Soviet Navy has suffered since WWII.
December 1984Soviet Defense Minister, mastermind of the  invasion plans for Western Europe, suddenly and mysteriously dies.
March 10, 1985Soviet Chairman Konstantin Chernenko dies
March 11, 1985Soviet Chairman Mikhail Gorbachev elected
April 26, 1986Chernobyl nuclear reactor accident
May 12, 1988An explosion wrecked the only factory that made the rocket motors for the Soviets’ deadly SS 24 long-range missiles, which carry ten nuclear bombs each.
August 29, 1989Sr. Lucia affirms in correspondence that the consecration "has been accomplished" and that "God will keep His word."
November 9, 1989Fall of the Berlin Wall
Nov-Dec 1989Peaceful revolutions in Czechoslovakia, Romania, Bulgaria and Albania
1990East and West Germany are unified
December 25, 1991Dissolution of the Union of Soviet Socialist Republics

Letter of Sr. Lucia to Pope Pius XII requesting the Consecration of the World and Russia to the Immaculate Heart

Most Holy Father,
Humbly prostrated at your feet, I come as the last sheep of the fold entrusted to you to open my heart, by order of my spiritual director.
I am the only survivor of the children to whom our Lady appeared in Fátima (Portugal) from the 13th of May to the 13th of October 1917. The Blessed Virgin has granted me many graces, the greatest of all being my admission to the Institute of Saint Dorothy. (To here this is copy of the sketch the Bishop sent me.)
I come, Most Holy Father, to renew a request that has already been brought to you several times. The request, Most Holy Father, is from our Lord and our good Mother in Heaven.
In 1917, in the portion of the apparitions that we have designated "the secret," the Blessed Virgin revealed the end of the war that was then afflicting Europe, and predicted another forthcoming, saying that to prevent it She would come and ask the consecration of Russia to Her Immaculate Heart as well as the Communion of reparation on the first Saturday. She promised peace and the conversion of that nation if Her request was attended to. She announced that otherwise this nation would spread her errors throughout the world, and there would be wars, persecutions of the Holy Church, martyrdom of many Christians, several persecutions and sufferings reserved for Your Holiness, and the annihilation of several nations.
Most Holy Father, this remained a secret until 1926 according to the express will of our Lady. Then, in a revelation She asked that the Communion of reparation on the first Saturdays of five consecutive months be propagated throughout the world, with its conditions of doing the following with the same purpose; going to confession, meditating for a quarter of an hour on the mysteries of the Rosary and saying the Rosary with the aim of making reparation for the insults, sacrileges and indifferences committed against Her Immaculate Heart. Our good Heavenly Mother promises to assist the persons who practise this devotion, in the hour of their death, with all the necessary graces for their salvation. I exposed the request of our Lady to my confessor, who tried to have it fulfilled, but only on the 13th of September 1939 did His Excellency the Bishop of Leiria make public in Fatima this request of our Lady.
I take this opportunity, Most Holy Father, to ask you to bless and extend this devotion to the whole world. In 1929, through another apparition, our Lady asked for the consecration of Russia to Her Immaculate Heart, promising its conversion through this means and the hindering of the propagation of its errors.
Sometime afterwards I told my confessor of the request of our Lady. He tried to fulfill it by making it known to Pius XI.
In several intimate communications our Lord has not stopped insisting on this request, promising lately, to shorten the days of tribulation which He has determined to punish the nations for their crimes, through war, famine and several persecutions of the Holy Church and Your Holiness, if you will consecrate the world to the Immaculate Heart of Mary, with a special mention for Russia, and order that all the Bishops of the world do the same in union with Your Holiness. I truly feel your sufferings, Most Holy Father! And, at much as I can through my humble prayers and sacrifices, I try to lessen them, close to our Lord and the Immaculate Heart of Mary.
Most Holy Father, if in the union of my soul with God I have not been deceived, our Lord promises a special protection to our country in this war, due to the consecration of the nation by the Portuguese Prelates, to the Immaculate Heart of Mary; as proof of the graces that would have been granted to other nations, had they also consecrated themselves to Her.
Now, Most Holy Father, allow me to make one more request, which is but an ardent wish of my humble heart; that the feast in honour of the Immaculate Heart of Mary be extended throughout the whole world as one of the main feasts of the Holy Church.
With the deepest respect and reverence I ask for the Apostolic Blessing. May God protect Your Holiness.
Tuy, Spain, 2nd of December of 1940.
Maria Lucia de Jesus
From Novos Documentos de Fátima, Fr. Anthony Mario Martins, SJ (Oporto: 1984). English edition: Documents on Fatima & Memoirs of Sr. Lucia. (Alexandria, SD: Fatima Family Apostolate, 1992).